6 years ago | By My Bulawayo | Posted in Entertainment, local news 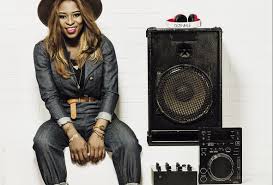 South African musician Bucie  popular of her house track ‘easy to love ‘and ‘the my name is’  hitmaker DJ Zinhle staged a splendid performance, which left people  green with envy asking for more at the Golden Pilsener Afro-Fusion Concert  held at Queens Sports Club in Bulawayo  on Saturday night.

The concert which was themed Come Cheer the Legends,  hosted by Delta Beverages, saw many people gathering to experience an early christmas mood which came at a good time in the city of Bulawayo as Highlanders supporters were in a jovial mood after Highlanders clobbered Dynamos in a mouth watering encounter at Emagumeni. Bulawayo comedian and Skyz Metro fm disky jockey Babongile Skhonjwa  also entertained the crowd as he sang Bosso songs.

clad  in a black outfit, the beautiful house music lady Bucie,born  as  Busisiwe Nolubalo Nqwiliso, performed her hit songs Shela and Easy to Love, much to the delight of the fans, who sang along to the songstress as they enjoyed the show. performing also was the Bulawayo house group Djembe Monks who showed the revellers a few tricks up on their sleeves and lived up to their name.

DJ Zinhle, populary known as the first lady for house music took to the decks to show Bulawayo what she had brought for them, she got the crowd singing when she played her hit song ‘ my name is’. Again the Gafa President Winky D left the crowd lushing out their tongues singing along to some of his hit songs such as ‘ Disappear’

speaking to some of the people who attended this show they appreciated the work done by Delta beverages for bringing vibe in the city of kings by sponsoring such an event.” we are happy Highlanders won and Delta just brought a way to celebrate this” alluded one happy Highlanders fan blowing his vuvuzela.