7 years ago | By My Bulawayo | Posted in Business Feature, Centrestage

We had the opportunity last week Thursday to sit down and chat to the Functions and General Manager of Nesbitt Castle Amy-Leigh Rudolph, about all the exciting things going on at Nesbitt Castle.

Tell us more about The Nesbitt Castle

The Nesbitt Castle is over 100 years old, somewhere between 1908 and 1910 it is thought that construction of this masterpiece began. We have 10 suites which are all very different and each one very unique. We would like to believe that we offer not only accommodation but a very extraordinary experience as the castle is rich in history.

It was initially built as a residence by Thomas Holdengarde; he felt living in a humble house was not for him. He built the Castle without plans and Over the next 30 years Thomas (who by now had acquired a wife) toiled away on the site with a small band of dedicated workers building turrets and towers, twisting passageways and crenellations. He lived here with his family and initially never wanted it to have any running water and electricity. Maude Holdengarde his gracious and loyal spouse eventually had electricity installed by squirreling away her housekeeping money and waiting until Thomas was away in South Africa at a conference! Running water, flush toilets and a telephone were only installed after Thomas’ death in 1948. After his passing away, his family moved out, but the Castle stayed within the family name but lay in ruin. Only in the 80’s did Mr Nesbitt see it as a piece of land that he wanted. He fell in love with the castle but his family originally advised that if he was to buy the land he should destroy the castle and rebuild. However he chose to renovate the castle with the help of his friend John Osborne and through the process discovered rooms that nobody even knew existed, because the passages were so narrow and walls had fallen in. Some of the thick granite walls that Thomas had so lovingly built with his amateur team, consisting of basically mud and water to hold it together, needed underpinning and reinforcing with 20th century techniques and ceilings and floors were hazardous after 70 years of water seepage. Mr Nesbitt officially opened it as a boutique hotel in 1990. 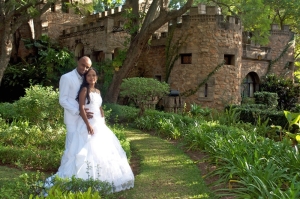 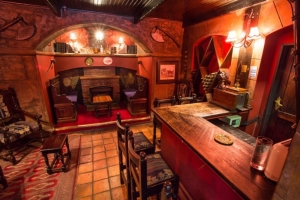 How Busy are you currently?

November is quiet. Things generally pick up towards end of November when we start having end of year corporate parties and then of course there are all the weddings in December.

What type of Market do you attract?

It’s a varied market, we get tourists but we also get a lot of corporate clients. A lot of our weddings are ex-Zimbabweans who are coming home to get married. We enjoy working with them because they bring in ideas from first-world standards. So we can’t say we have one type of market, we serve a very diverse market.

Anything new at the Nesbitt Castle?

The Dragon’s Den pool bar, is a new addition to the family. We have broken the misconception that Nesbitt castle is too expensive or exclusive. The Dragon’s Den is a casual, relaxed chill by the pool vibe. We serve beer, cocktails, pub food e.g. kebabs and chicken wing platters. It’s a really nice relaxed atmosphere. It makes for a really cool girls night out; we have had a couple of hen parties there.

It’s open Wednesday to Sunday and is closed on Mondays and Tuesdays, during the week it opens at half past 2 and weekends at 11:30am and closes at 10:30pm. No bookings are required and every now and then we have live music on Friday nights. It’s also child friendly, we have an enclosed playground so it’s safe.

You speak of being part of a Nesbitt hospitality, tell us more

Nesbitt hospitality consists of the N1 Hotel in Vic falls, the N1 in Bulawayo, N1 Harare, Nesbitt Arms in Chiredzi and The Nesbitt Castle .The thought behind the N1 hotels was clean, comfortable and affordable accommodation as opposed to the luxury boutique accommodation that the Nesbitt castle offers. N1 hotels have really done well this year, they have been very busy.

What awards have you picked up along the way?

We have won Trip Advisor Certificates of Excellence awards in 2013, 2014 and 2015 and received some Megafest Tourism Awards; we were first runner-up in Hotel of the Year in 2013 and in 2014 we were awarded The Restaurant of the Year and then this year we won Best Boutique Hotel of the year. So we continue to strive and meet all service requirements to not only maintain but better our expectations.

Would you say your location is an advantage or a disadvantage?

It’s in a really lovely location because we would not want to be in the hub of the city. It’s quiet and lends itself really well to corporate getaways. We have Wi-Fi and our Conference Centre can take up to 100 people depending on the seating arrangement. We really have some good corporate packages – Platinum (Full Day), Gold (Half Day with Lunch), Silver (Half Day no meal) and Bronze (Venue Only). Our full day package includes welcome teas , morning teas and sandwiches, a two-course lunch and a soft drink, afternoon teas and scones and of course your cordials, mineral water and mints during the conference itself. So it’s no stress for corporates with everything taken care of. 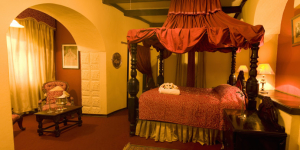 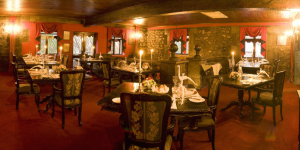 Tell us more about being a boutique hotel

We only have 10 suites, 9 are original castle rooms the 10th was an add-on by Mr Nesbitt. We don’t have your basic standard rooms, single rooms and double rooms. But within our 10 suites we have managed to come up with Standard, Deluxe and Superior. What makes them different is the size of the suite. Our superior suites have a little lounge area so that people can meet or relax in their rooms. Our Standard suites are smaller rooms. Then the Deluxe suites are in-between. All the suites are very welcoming and comfortable.

What other services do you offer?

We have The Coach House Restaurant, and the Functions Centre – where we host our weddings, birthday parties and big celebrations. Our venue capacity there is 300 pax. We tend to focus on quality over quantity. Our chapel seats up to 50 pax and is ideal for small, intimate ceremonies but we use the garden area for larger ceremonies.

With the weddings how do you go the extra mile for your brides?

At our venue, the bride can get dressed here with all her bridesmaids. The photographers love that as it makes for beautiful pre-wedding photos.  Also, the newly-weds get to spend their honeymoon night here at the Castle. We have a recommended list of brilliant outside service providers in regards to decor, pa systems and photographers as well excellent caterers for couples to choose from. This allows them a variety of choice in the menu selection from Indian, Greek, Italian and Traditional as well as Western cuisine. Nothing is too difficult when you get married at The Nesbitt Castle.

Why would you give away the catering function?

We believe by doing this it allows us to give the brides the best choice of menus right at their fingertips. This also allows our Executive Chef time to focus on our in house functions, like Mother’s Day, Father’s Day, and Christmas Day lunch, which we started to advertise just over two weeks ago and it is almost fully booked, we have limited spaces available so people need to get in while they can.

We want to focus on having more functions within the Hotel. On the 29th of December Carl Joshua Ncube is coming to perform. He just recently came back from a show in JHB and will be doing a show alongside Trevor Noah soon which is wonderful for him and his team but for as well, we are happy to be able to host such a brilliant comedian and business man in The City of Kings and where better to watch him than at The Nesbitt Castle itself.

Any other functions or events we should look out for?

The Castle is in Bulawayo and should belong to the people of Bulawayo, so we really just want to open it up to them. We will also be coming up with kiddies birthday party packages, involving the Dragon’s Den.

We also held a Mother Daughter day that we called Pamper Day; we had beauticians offering their services and Mini High Tea in the garden. This was on Africa Day this year and we plan on doing it again next year but on a much bigger scale. 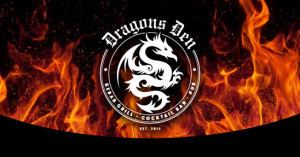 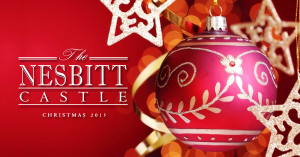 How are you involved with in the community/social responsibility?

We have elderly tea once a month. It’s something that is very close to Mrs Nesbitt’s heart. They come for tea and a tour of The Castle. At the end the year we will be hosting a Christmas Lunch for them. We are also involved with an orphanage in Chiredzi. We assist with what we can for them in terms of linen, crockery etc. We also facilitate school tours and would normally have a picnic lunch for the kids in the gardens after that, but reservations would need to be made for this arrangement.

In addition to all this we have a student program throughout the year, whereby we enrol 3 students as interns. We run interviews for this at the end of the year, around November or December.  The Interns come from universities and schools of hospitality and we impart hospitality knowledge to them. During their time here, they will go through every department as part of their training and this helps them ignite their passion for the hospitality industry. It is an awesome programme we meet a lot of wonderful individuals. 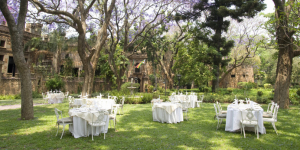 Thank you so much for your time

Thank you for coming out to see us.