7 years ago | By My Bulawayo | Posted in Centrestage, Fashion, Spotlight

A flair for fashion, a passion for design. That in a nutshell can be used to describe Unique Sibanda. Bulawayo’s very own designer based in the U.K. She has been in the fashion industry making a name for herself and representing the country. Getting an interview with her was fairly easy, but setting down a time, not so much. Walking into the interview I was nervous and excited, but the aftermath was inspiring

Please tell me briefly about Unique. How you grew up, where you grew up and its influence on your career

I was born in Bulawayo and grew up in Hillside but spent most of my early years in Lobengula. I really don’t remember when we moved to Hillside but I think it was in 84/85. So I am not a born free. Went to Henry Low, then St James, Montrose and Mpopoma. I was in every pageant, like Miss Teen Queen, Miss Universe Zimbabwe. I worked with Faces Models Agency which was run by Nandi Nkomo at the time and a few campaigns for House of Kumali, Zim Furnishers and Meikles. I was also Miss Legs Bulawayo in 1999. That was exciting and back then you won practical stuff. I won some money and a hoover, which I think my parents still use till today.

I’ve always been sewing and tinkering with fabric since I was a toddler…. I really can’t say how far back but my earliest memory was at 6.

I really didn’t know what I wanted to do when I was younger. I just followed my passion. I knew I loved sewing and fabrics. It’s only later in life after my modelling stint, I had dreams of becoming a designer…. I used to dream of New York Fashion Week and Paris Fashion Week, not as a designer though but as a model lol. I was turned down for Super Model because I was too short. So I guess I knew I had to change my dream. My dad always reminds me of how I was always determined to do what I set out to do

That must have seemed like seemed like an unattainable dream, especially for that particular time. Was your family supportive, or did they take a lot of convincing as well?

It still is, I can’t say I’ve gotten there yet…. I still dream of London Fashion Week, but yes at the time it did seem so. My parents still admit to not understanding why I was so weird especially when id cry if I got a Christmas dress instead of fabric. They kind of just let me be. It didn’t affect my grades and how I did in school. They thought was just a phase and gave in. With time I’ve convinced them. They have been supportive.

I am sure that must be a relief, not many people who follow their passions can say that.

It was but it was push. I had to keep up with my school work so they wouldn’t take away my fabrics and would sew late into the night, which I still do to this day. I think my worst enemy was myself. I didn’t believe in what I was capable of. 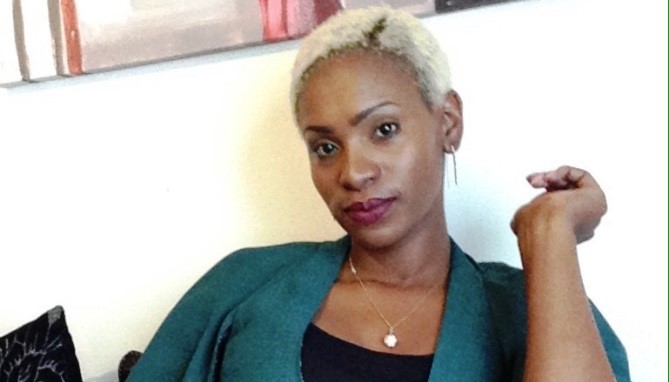 So what gave you the courage to pursue this? Are you deeply religious?

Even with my Christianity I really didn’t believe it was my calling. It really been life, and accept what I am capable of. And what I do is sew. I eventually decided not to fight…I love fabric. I love the way it wraps and can be manipulated to flatter the body. Over the years I have met some amazing people from church, work and my social circles, who have noticed my talent and pushed me. Sometimes I forget to sleep or eat and next thing I know its 6a.m in the morning. But I discovered I’m happiest when I’m sitting behind a sewing machine. And the inspiration just keeps pouring.

On the topic of challenges, have you faced any being female and an African in a predominantly European Industry?

Wow! The main one is not being taken seriously… The industry is full of male designers and there are a few females that break through is difficult especially for black females. The other one is trying to make that distinction between being a designer and an African designer. I believe in hard and perfecting an art. I must say, we don’t treat out tailors with much respect. We bring our work to them and expect it at a fraction of the price, and if that person is a relative it is expected to be done for free. I have had challenges in that respect. Being seen as just a tailor. In our eyes that is not a career’. Which is why I decided to go to university to study Fashion marketing, to learn the business of fashion.

Did having that knowledge make it easier to make name for yourself?

I believe so, and I am still learning. The fashion business is ever changing and quite challenges. The knowledge I’ve gained has helped to keep me focused because us creatives can be wild at times. Le Ekhaya is a business. A brand. So with that it has to have structure. There is a lot of thought that goes into making of a brand. So that the collections that are produced always remain true to the identity of Le Ekhaya. So every decision has to be thought through from the choosing of fabric to the way the public view the brand.

I read the brand is inspired by the Ndebele phrase (and not a mixture of French and Ndebele as I had read it), so what exactly inspires your creations?

LOL, it is a `very’ Ndebele phrase. The brand is all about `back home’, a return to self and origin. For me it really is being able to express who I have become as a Ndebele woman born and raised in Bulawayo and now living in UK. I did not want to lose who I was and who I have become.

By understanding that I am a fusion of both worlds, the West and Africa, I am able to grow into whoever ii will be in the future. I am a fusion that embodies the fierceness of the vintage woman, the fragility of the modern woman and the vision of the future woman.

Can you tell me about your first runway show case, or your favorite?

My first one was years ago in 2006when I really didn’t know much about the fashion business and being able to tell a story. I learnt a lot from that and stepped away from the runway till the 4th July 2015 at the Zimbabwe Fashion Week in Birmingham, it felt good to be back in the business. I met an amazing styling team who helped fine tune the collection which later presented at Africa Fashion Week.

I don’t really have a favorite cause by the time the show comes id be wanting it to be over. There are a lot of sleepless nights that go into organizing these events. I put my hands up to the organizers.

Where was Africa Fashion Week held?

It was held in Kensington Olympia in London. It is quite a global event where Africans from all over the world come to showcase and exhibit their goods. The KZN Fashion Council was there as well earlier this year. I got to meet one of my favorite designers Thembeka Yadah of Yadah Exclusive. I have been an admirer of her work for a long time.

Lol, she really does inspire me. I met presenters from Fashion One t.v, I was star struck…I felt like a gold fish in the sea

I am sure you were trying your best to look like this was all in your stride.

Yep, I was a nervous wreck backstage. I was showcasing with designers that had been doing this for years. There was even a 16 year old who was doing this show for the third time. So you can imagine how inexperienced I felt.

Wow, that must have been both daunting and exciting, to finally see your dream come to life.

It sure was….A mixed bag of emotions…. But quite surreal and humbling.

That’s the best bag to have kkkk

But how do you think your involvement in these fashion weeks will help local (Zimbabwean) designers?

I hope it inspires them, I’d love to work with Zimbabwean designers in the future if the opportunity comes up. There is so much talent in Zimbabwe. Zimbabwe’s profile is being raised and as a Zimbabwean I am flying the flag very high and proud. Zimbabwe has dominated the press over the years and shown in a very negative light. It is up to us Zimbabweans to raise its profile by showing the world what we are capable.

I think we need to set up our own Zim Arts Council. That works to promote Zimbabwean artisans. So as to be able to bring back the wealth in the country

Speaking of Zimbabwe, how does it feel to be nominated for this year’s ZIWA’s (Zimbabwe International Women’s Awards) for fashion designer of the year?

I’m ecstatic, I didn’t see that one coming. I consider myself as being very new in the game. Although I’ve been designing for years, Le Ekhaya is only a few years old and as a business, it’s officially a month old.

I’m looking forward to the ceremony even if I don’t win, it will be a good networking opportunity especially to learn from my fellow Zimbabweans who have been doing this for years.

What can we look forward from Le Ekhaya?

There is so much in store. We are working on a Spring/Summer collection at the moment and looking to show case soon. There are also a number of projects that we are involved in that are still in the beginning phases. But rest assured that our Zimbabwean flag will be flying high midst all of this. The challenge now is how to top the Autumn/Winter 15 collection. Which is available to purchase online   www.leekhaya.com . What I really desire is to work with young women, and developing skills and sharing the business knowledge that I have gained. Our future lies in our hands.

In terms of working with young women, is there a platform which they can utilize to get their works across?

We are currently working on a mentoring platform but as you know these things do take a while to establish, but will definitely keep you posted

Lastly, do you have any pearls of wisdom to share with aspiring and struggling designers?

Just to keep at it. Get better. When I was still trying to get my collection together I would make sure that I made at least one garment a day. . Work on the finish and surround yourself with inspiration, be it people, books etc. And always do your research, I cannot stress that enough. Know what you are about so you can’t be swayed.

Thank you so much for taking time out your busy schedule. I appreciate it and good luck with the ZIWA’s

Thank you very much…I enjoyed chatting with you